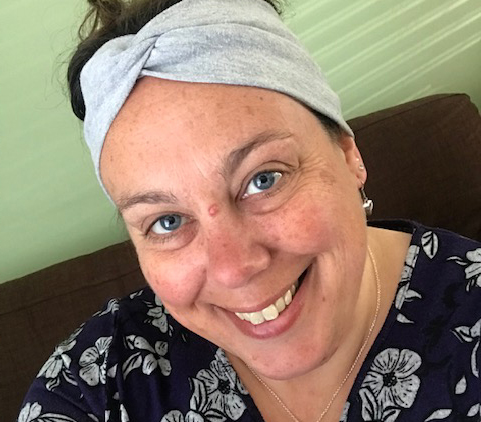 She lost her father to suicide when she was 16 and dealing with unresolved grief, especially from a sudden death has and is a part of her depression. Thankfully, she feels as though mental health awareness and support has improved over the years.

Erin previously lived in Berkshire and worked in a mental health nursing home for 7 years. Unfortunately, she experienced a particularly bad wave of depression and left her job. Since then, Erin has worked in many roles and has undertaken several volunteer opportunities, all whilst experiencing recurrent episodes of depression and anxiety.

In 2012, Erin relocated to Devon and was out of work. She was referred by her GP to DAS (Depression and Anxiety Service – now called TALKWORKS) and through them to Pluss’ Mental Health Opportunities Team where she received 1:1 support, joined the Peer Support Group and was signposted to Positive People and she received funded private counselling and gym classes through them, both which she has continued privately.

Whilst on the Pluss programme and with their support, Erin started to volunteer and secured a paid part-time opportunity, where she has now been working for 2 and a half years.

I really enjoyed the Peer Support groups held by the Pluss Mental Health Opportunities team. I felt like it was a place for understanding, support, and community.

Because of her own journey and experience, Erin is passionate about mental health and with the support of Pluss has taken part in Mind Peer Support facilitator training. She is considered as a valued member of the peer support groups and always works to support others in the group. Outside of the groups, she supports as admin in a participant-created Peer Support WhatsApp chat.

“The COVID 19 lockdown has had its pros and cons for me. I have enjoyed some aspects including the chance to stop and slow down and reflect on life, prioritising ‘me-time’ and walks in nature. But I have struggled with the lack of socialisation with other people socially and working from home.”

Erin’s goals with Pluss are to continue being involved and hopefully can develop her Peer Facilitator Training in some way with them and to carry on supporting others around her.