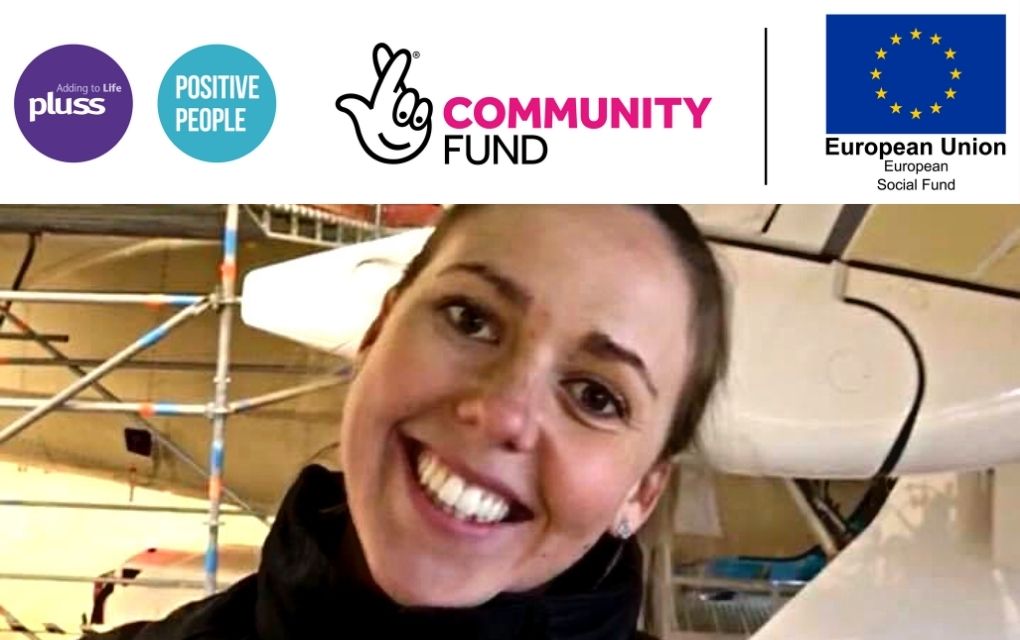 Jo is an aircraft engineer by trade. After completing her training, she spent much of her time travelling around Europe working on passenger aircraft for commercial airlines.

Then the 29-year-old’s life was turned completely upside down.

Jo was referred to Pluss Positive People by the Devon Rape Crisis and Sexual Abuse Service.

After an initial chat with the Positive People Devon team, it was suggested she might find the Empowering Women course a useful way of meeting other people,  sharing common interests and finding some strength and support. Covid restrictions at the time meant the course was run online, with participants joining on their computer rather than face to face. Even so, chatting with a group of strangers can still feel quite daunting if you’ve not done it before, so what was going through Jo’s mind the first time she took part?

“I remember being so nervous,” she says. “I was nervous in case I was late. I was nervous about what the format would be. My heart was pounding when I introduced myself to the rest of the ladies.

“Actually there was nothing scary about it at all – yet that didn’t stop me feeling nervous. But after the initial ice-breaker – by the end of that first session – I was already feeling comfortable. Everyone was just so lovely and supportive.

“What was really lovely was that this was a group of people who’d never met before, there were people from different ethnicities and backgrounds, some that were younger, others who were retired. I wasn’t expecting such a diverse group of people. But that made it really lovely. In fact I made friends and I’m still in touch with one of the other women on the course even now.

“We’ve not actually met in person yet, but we send each other emails and there’s something really quite nice about having that sort of ‘distance relationship’ where we’ve both really connected and share similar interests.”

The Empowering Women course is held over a number of weeks and includes lots of guidance and support to help with wellbeing and practical issues.

“The segments of the course were not only emotionally supportive”, says Jo, “some were really practical too. It helped me with things like knowing where to go to get information on supporting my financial situation and being directed to other sources of useful information.

“It was like a really good hub of knowledge. Topics like shutting down negativity, self-care and changing thought processes in order to be able to emphasise the positives.” Jo says one of the best things about the group sessions was that there was no pressure; everyone could go at their own pace: “Because it was all done online, some people felt more comfortable with their microphone and camera switched off, some just sat and listened and occasionally made use of the chat room, others were happy with their camera and microphone turned on,” she says.

“We were just made to feel very, very comfortable. It revolved around the needs of the participants – one lady was even joining in whilst she did her ironing and that was fine – no pressure or expectation, we were all able to take things at our own speed.

“Every week there was a different topic and we often had guest speakers. One of those sessions was really valuable to me because I’ve never been on benefits before. I was working right up until the assault, and getting financial support was like having a whole new set of hoops to jump through and when you’re going through a rough time, it’s really good to have someone tell you what’s available and how to go about claiming.”

During the Empowering Women course, Jo’s coach Jacqui picked up on the fact she’d always been interested in Yoga and wellbeing and that Jo had spoken about an idea for starting a business centre for women survivors. She wanted to create something that would include alternative, holistic therapies in a less clinical environment. “My idea – my goal if you like – is to take all the basics and merge them with nature. Including woodland walk-and-talks and elements of yoga, reiki, counselling, and therapy. A plot of land rather than a surgery, where people can enjoy their surroundings and feel connected.”

Her enthusiasm and excitement when explaining her idea is palpable.

“Jacqui told me that Positive People also offered support and guidance in becoming self-employed and that I qualified to enrol. I signed up, and Jacqui has worked hand-in-hand with me for seven months to move towards my dream.

“Because we had regular scheduled phone calls, it soon began to feel like I was stepping back towards employment – and that’s really important at a time when everything’s up in the air. Those regular calls helped me keep on track. I can’t believe how much support and guidance I was given.

“I was helped with finding and enrolling on courses, filling in paperwork, getting DBS checks etc, and we did a lot of work, together, to create a business plan.”

Now Jo is in the process of looking for some land. She’s submitted her business plan to The Prince’s Trust and has been accepted on to their Enterprise Programme. One of the first things she did when she heard she’d been accepted was to email Jacqui to let her know how excited she was!

“You know when you just feel like you were in the right place at the right time…?” she asks, “well that’s how I feel about Positive People – and in particular my coach, Jacqui. She was a real shining light. She’s really inspiring and, business-wise, she just has so much experience to share.” Jo looks back on her time with Positive People with a great deal of fondness and recognises it as having been really useful. And even though she’s now completed the programme, she’s determined not to lose touch.

“Although I’ve now moved on from Positive People to The Prince’s Trust, I will always keep in contact with Jacqui and the team. And if I was talking to anyone  thinking about contacting Positive People, I’d tell them to go for it without any hesitation.

“I can’t recommend Positive People enough, they’re a great hub, a source of information and they are there for EVERYONE – all walks of life, all situations – and I think that’s brilliant!”

Jo’s new business venture may be in its infancy, but this inspirational former participant has big plans for the future.

“Wouldn’t it be great if we could complete the circle; I was referred to Positive People due to my circumstances – perhaps, in the future, Positive People will be able to refer people to me. I would love that!”

Please note: Pluss is not responsible for the content of external websites