Jash is making a splash in his new job 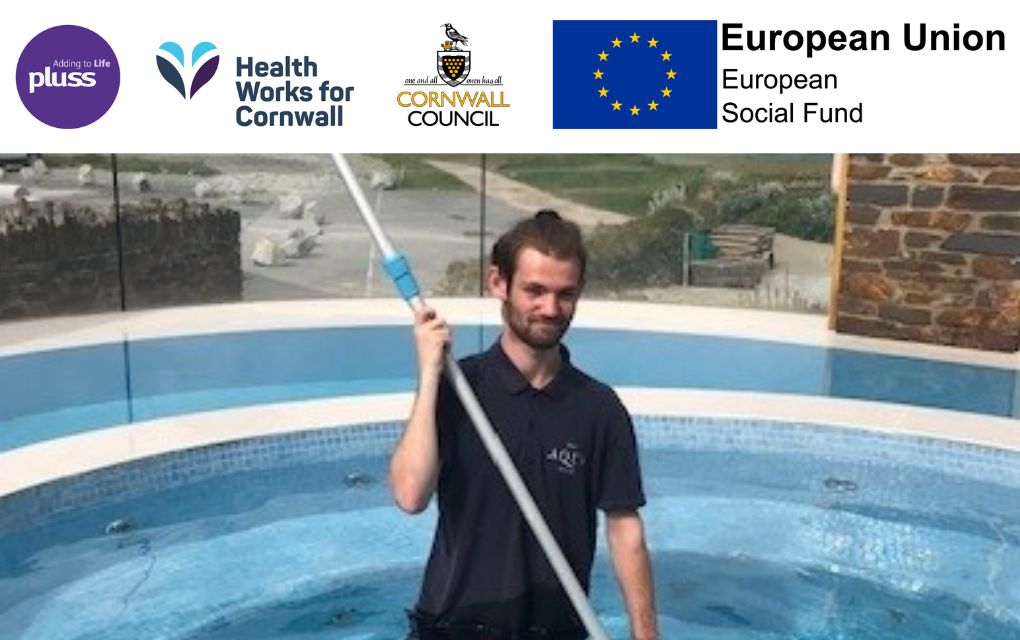 No sooner had Jashner completed his work experience, arranged through the Pluss’ Health Works for Cornwall team, than he landed himself a job working at one of the county’s most iconic hotels!

Here at Pluss, we love sharing ‘good news stories’ and here’s another one that has really made us happy!

Whilst Jash was being supported at Kehelland Trust, the team at Health Works for Cornwall helped him secure work experience at the hotel. But it was Jash, himself, who managed to get an interview for a job and is now ready to take on a paid position at the hotel’s Aqua Club.

Through Jashner’s time at The Headland, since last September, he has been supported by Stephen and Helen from Pluss. Recently, Helen took a trip to Newquay to see how Jash was getting on and it’s fair to say he’s absolutely loving it!

Jash told Helen he was very excited to be moving into a paid role.

“He was thoroughly enjoying his work experience and looking forward to being added to the payroll very soon,” says Helen, who also chatted to Jash’s support worker, Ian, and to Matt, one of the Headland Hotel staff who’s been working alongside Jash.

Here’s what they had to say:

Ian: “When Jash first came to the hotel, he was very quiet and shy. He didn’t like to ask questions and stayed close-by for moral support. He now talks to staff and guests and is very competent in his role in the Aqua Spa.”

Matthew: “The capacity for Jash to work on his own initiative has grown as his confidence has grown. Speaking and communicating with the rest of the staff – and with the guests – has come on immensely.

“He’s been able to take ownership of his day-to-day tasks, He keeps the laundry room clean, tidy, and organised. And on top of that he has to keep up with the Aqua Spa’s demand for fresh towels and robes. I am looking forward to Jash becoming a member of the staff team!”

Matthew told Helen how much he appreciates the work that Pluss does in helping people with neurodiversity barriers and introducing them to the hotel. He’s already looking forward to working with next September’s volunteers and work experience learners from Kehelland.

Ian said he was really proud to see Jash develop so well, a factor which has led to him getting a paid position at the club. “Through Pluss working with the Kehelland learners Jash has been able to achieve this,” he says.

We wish Jash all the best for his future and are delighted we were able to support him at the start of his journey. He might be ‘throwing in the towel’ where the laundry is concerned – but he’s definitely cleaned up when it comes to landing a new job! 😃

Health Works for Cornwall is part-funded by the European Social Fund. It offers support to anyone in the county who is aged 16+, out of paid employment and looking to improve either their physical or mental health.

If you’d like to find out more about the support that Health Works for Cornwall can offer, drop them an email at HWC@Pluss.or.uk 0r click on the link at the bottom of the page.

Jash at the Newquay Headland Hotel